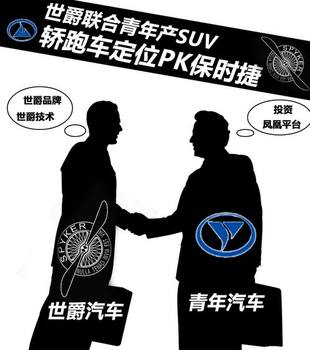 If it is necessary to take a look at the 2011 China auto industry mega event, then the huge group and the youth car will definitely be selected for Saab. Although both of them eventually ended in failure, we still seem to be able to smell the fierce scenes of the time, especially at the time. The youth car faces the thornbush still persists to the last willpower to admire us. However, despite Sabourâ€™s failure, the youth car is not without merit, especially its acquisition of Saabâ€™s newly developed Phoenix platform technology. A few days ago, the online car market learned that the youth car and the Spyker Holland officially signed an agreement to establish a joint venture company and develop high-end SUVs and high-end cars and coupe according to the technical cooperation between Phoenix Platform and Spyker.

In agreement one, the young car will invest 10 million euros in Spyker, subscribe for 29.9% shares of Spyker.

Agreement 2. Youth will establish a joint venture with Spyker Spyker United Co., Ltd., and invest 25 million euros to obtain a 75% stake in the company. In the future, the company will produce models including SUVs, cars, and coupe.

Agreement 3: Youth will establish a second joint venture with Spyker, namely Spyker Phoenix Co., Ltd., and Young Motors will convert 80% of the shares of Saab Phoenix into a joint venture company. The company will manufacture a series of high-end cars higher than Saab. , And production and sales in Europe and China.

After signing with Spyker, Pang Young, the president of the youth car, accepted an interview with the reporter. He revealed that future Spyker and Spyker products will be uniformly linked to the Spyker brand logo and sold in the same channel in China. Among them, Spyker's joint production of products is mainly Spyker D8 four-door SUV, the fastest will be available in 2014.

Coupe based on Phoenix platform development positioning higher than Porsche

In the interview, Pang Youth also revealed that Spyker Phoenix will develop a series of new high-end cars and coupe based on Saab's Phoenix platform technology. The development models include the Spyker Phoenix 93, 94, 95, 97 models, and will European and Chinese production and sales, the overall model positioning will not be lower than Porsche.